With Glowing Hearts: A Social Media Film You Need To See 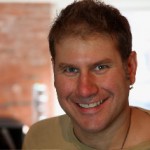 We almost went to college together – I was accepted to Algonquin College for TV Broadcasting and I’d have been in the same class as Andy. I opted to attend the same program at Loyalist College instead – being only 17 at the time, my parents and I felt I was a bit too young to move out to a strange city to attend college. Close to home was best.

I was lucky though – mine and Andrew’s paths would cross eventually, when we both wound up working for Skyline Cablevision’s community TV channel. Andy started out as a camera guy – I was a producer. We worked on countless productions together over the years, and even interviewed the Barenaked Ladies together (before they were famous). He and I became fast and great friends.

Even back in those early days, Andrew had the directing bug. He was a visionary – always coming up with new and clever ways to tell a visual story. I knew even then that he was destined to move on from community TV and do great things.

Flash forward 20 years and Andy now has a successful career in the film industry in Vancouver. He works regularly on feature films and TV commercials. I know he loves his job, but more than anything, I always knew he wanted to make his own film. So two years ago, when I first heard about “With Glowing Hearts“, I was thrilled that his dream was finally coming true.

The 2010 Olympics in Vancouver was a transformative time for the city. Years of planning, money, and effort were culminating in a world class event, taking place right on Andrew’s doorstep. But he knew there was more to the story than the flash and pizzaz of the Games themselves. So, armed with a Canon 5D MkII, Andrew and producer Jon Onroy set out to Vancouver’s Downtown East Side – one of the lowest-income regions in Canada – and the one of the places the Olympics would be taking centre stage.

The 2010 Olympics has been dubbed by many as the “Social Media Olympics”. It was the first Games where the impact of social networks on the coverage of the event would be truly noticeable. With hundreds of millions of people taking to the online airwaves of Facebook, Twitter, Flickr, and YouTube, the world would no longer see the Games through only the eyes of big media. Now, everyone had a voice. Everyone was a publisher – especially those whose lives were being affected by the Games themselves, and especially the residents of Vancouver’s Downtown East Side.

With Glowing Hearts is the story of the people of Vancouver’s Downtown East Side, as they set out to find their voice inside one of the largest events on the planet. Using social media, the people of this tightly-knit neighbourhood strive to be recognized as a credible, alternative media voice amongst the noise of the mainstream. Just 5 years prior, what they achieved during the Olympics would simply not have been possible, but their use of technology and the social Web gave them unprecedented access to tell their stories; stories of being on the fringes of life during a major world event, stories of community and camaraderie, and stories of hope.

If you have even a remote interest in social media and the true power of these tools to create movements and build awareness, you MUST see this film. Andrew and Jon have brought together an incredible group of big voices, who tell an extremely important story about how technology has transformed the way that they bring attention to their own personal struggles and awareness to the larger issue of poverty within marginalized communities.

With Glowing Hearts is currently seeking wider distribution, however arrangements can be made directly with Andrew for community screenings and access to see the film. Contact him on Twitter @andrewlavigne or pre-order your copy of the film on their web site here.

Generation Social: A Social Media Documentary You Must See