Sometimes It’s What You Don’t Know 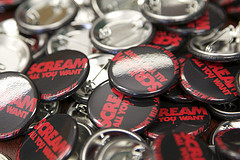 Remember how I occasionally will get on your case a bit about what it takes to overcome your fears and just get out there and start telling your stories? Well, I’ve been away from this blog for a bit, working on publishing some other things, so I haven’t been bugging you about it. But I’m back, so consider yourself warned.

As some of you who follow me on Twitter or Facebook may be aware, my husband Greg and our friend Tom are making a horror/thriller web series called “Scream All You Want“. Right now we are in the middle of shooting, and it’s consuming many of the weekends and evenings of our cast and crew right now. Things are going well, and while it’s tremendously exhausting, it’s been a lot of fun too. As we’ve been going through the production process, I’ve been making some observations about the process of creating something and putting it out there online for the world to see (what I like to call ‘publishing‘). Here are a few things I’ve discovered.

While both Tom and Greg do have considerable script writing and video production experience between them, neither of them has ever made a web series before. For better or worse, they dove head first into the project without really having a sense of what it would actually take to accomplish. First they had an idea. Over time, that idea evolved into a script. Then suddenly we were auditioning actors. Then before we knew it, we were shooting. Each step in the process, nobody was really sure how things were going to pan out. But since we didn’t know, we had nothing to lose.

Some people might call that naiveté, some might call it blind faith. Some might even say we are crazy. We’re probably pieces of all of those things. But when you don’t know what you don’t know, it’s actually a bit of a buffer. Because you don’t have to make assumptions about what might or might not happen. You just basically point the ship in the general direction of the shore, and go from there.

You don’t have to do it alone.

Back about a year ago when Tom and Greg came up with this idea, it was just the two of them, sitting around at a pub, having a pint and thinking about the idea. But as time went on and they moved forward, they did something really smart – they started to bring other people in on it. By association and sheer proximity, Tom’s wife Tracey, as well as myself, were happy to be brought into the mix early on. But it was when we put the call out for auditions that we realized that this process of creating something no longer rested squarely on the shoulders of the guys with the idea. Our casting call generated 55 inquiries, of which about 40 actors came out to audition (of which 8 now make up our main cast). We have a crew of anywhere from 12 to 16 people depending on the shooting day. We have had local businesses, friends and family members allow us to use their restaurants and pubs and antique shops and homes as our locations for shooting. And every single one of these people is a volunteer.

Guess what? You don’t have to create alone if you don’t want to. You just have to ask, and you will find in front of you an amazing support network. Find the people who are willing to help. Say an enthusiastic “YES!” when they ask what they can do to support you. Welcome their ideas and creativity, and treat them well, and what you create will be that much better.

So what are you going to do now?

There’s something to be said for stepping into the unknown, for jumping out on that ledge and just creating something new, then showing it off to the world. Yes, it’s still scary – really scary. It’s really, really hard work, and it’s exhausting. It will make you laugh your head off, and you’ll probably want to cry your head off sometimes too.

But you know what? I’ve learned that if it doesn’t make you scared and exhausted and exhilarated and want to cry and laugh at the same time, it’s not really worth doing.

So what are you waiting for? Go create something of your own. Share it with the world. Because it’s worth it.