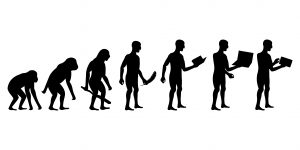 I’ve been using social media since 2006 when I started this blog. I got on Twitter in 2007 and was one of the first million users of the platform. For 11 years I’ve been fascinated by social media, and I’ve managed to integrate it into my work with Algonquin College as a professor, as well as Jester Creative, as a consultant and practitioner. I’ve experienced the ebb and flow of different platforms and watched them transform from simple and rudimentary to complex and multi-faceted.

It’s been an interesting evolution. In the early days, there seemed to be only a few voices. Now there are hundreds of millions. This has changed the landscape of communication on these platforms, and it’s meant one has had to evolve their strategies for communicating effectively along with the evolution of the platforms themselves.

So what’s different now, and how has social media evolved? Let’s take a look at a few key things.

You cannot turn on a television or radio, pick up a newspaper or go on the internet without seeing some reference to social media. From Twitter to Instagram, Facebook to Snapchat and more, these platforms have taken over as a key way to communicate with each other and with the masses. There are those that still maintain that social media is no more than a fad, and that it will die off eventually. But the truth is, it’s become the 4th medium (TV, radio and print being the others). It’s not going anywhere, and will only continue to become more powerful as a way to share and disseminate information.

Big name celebrities aside, social media has created its share of influential folks over the years. The fascinating part is that these influencers exist in really niche spaces. From self help to cocktails, and entrepreneurship to work/life balance, influential people have popped up everywhere. These are ordinary people who have found their voice online. They have true fans and even detractors, but they share one thing in common – they built what they have on their own, most of the time without the help of mainstream media. The ability for anyone to share their thoughts and ideas anytime, is one of the biggest advantages of social media. Anyone, and I mean anyone, can become influential in their niche. It takes hard work but it is possible and more and more people are realizing this every day.

For better or worse, social media has changed our behaviour. We watch television and movies with our smartphones or tablets in our hands. The “second screen” as it’s called, is a phenomenon that I don’t think anyone could have predicated 10 or 11 years ago. It’s split our attention in a very interesting and compelling way. It’s turned watching television and movies from a passive activity to a much more active one. In other ways, social media has changed who we interact with. I know that I’ve reconnected with friends that I would never have otherwise reconnected with. Now we know on a daily basis, what’s happening in each others’ lives. We make new friends via social media too. I can’t tell you how many people I know that I met through Twitter. Probably a couple of dozen, maybe more. Social media has made us act and interact differently. Our social skills have changed fundamentally. It’s really quite amazing when you think about it.

So what does it all mean? Well, I think we’re still learning what it means. But there’s no doubt that social media has changed a lot of things in our society, and it will continue to do so as tools and technologies evolve.

What say you? How has social media evolved for you? Do you use it differently now than you did, say 5 years ago? I’d love to hear what you think.

Are We Too Focused on the Next Big Thing?
TV Is Not Dead
Taking a Step Back from the Social Marketing Game