You Don’t Want to be a Social Media Expert 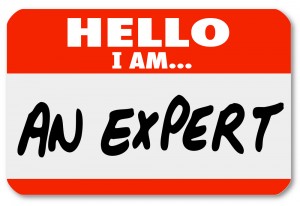 Why are people so hung up on labels? Ever since social media began its rise to mainstream popularity back in 2006 or so, I’ve seen it time and time again – everyone clamouring to become the next big “expert” on the subject. “I can teach you to Twitter in just 1 hour!”, “I’m a LinkedIN GURU and you can be, too!”! Still today, I see even more and more cringe-worthy iterations on the term “social media expert”. It seems like everyone has jumped on the bandwagon these days in one form or another. Everyone wants to be an expert…but why?

I think much of it stems from a desire to be like the “big players”. We see guys and gals who have had immense success with social media. People like Gary Vaynerchuk, a guy who, a few short years ago, worked in a wine store. Now he’s a bestselling author many times over, a world-renowned speaker, and an immensely successful businessperson working with Fortune 500 companies on a daily basis. People like Chris Brogan and Gini Dietrich fit into that category too – they have built immensely successful businesses and careers and have leveraged social media tools in the process. I get why people would want the same kind of success.

Yet I see it time and time again – people who are expending so much effort to position themselves as the next big “social media guru”. They are making a play to reach expert status, so maybe they can launch the next bestseller or get on the TED circuit. The problem is, they are trying to do this by making a million dollars teaching people how to set up Facebook pages.

You don’t want to be a social media expert.

Instead, how about spending some time figuring out what makes you unique? Gary Vaynerchuk is unique because of his personality. He understood that his outgoingness and loud, rambunctious spirit would play well in front of a camera (or maybe he didn’t, but he soon discovered it). He also understood that he knew a lot about a subject (wine), something that a lot of people didn’t know about. He put two and two together and was able to present wine in a way nobody else had done before.

Ultimately, Gary came up with an idea, leveraged his strengths and his knowledge of a subject and then acted upon it. He didn’t know for sure it was going to work, and he sure as Shiraz didn’t know that it would launch his career in a whole new direction.

Figuring out your uniqueness is really important, and it’s not easy to do. When I see someone describing themselves as a “social media expert” I often think, “big deal!”. There are a million people out there who can put that badge on, but does it really mean anything?

The ones who stand out are the ones who are unique. And the ones who are most unique are that way because a) they are exceptional at what they do and b) they allow their personality to be prominent in everything they do.

Knowing a lot about social media is great, but it’s got to go deeper than that. You have to be able to look at all of your experience, and everything you know, and piece it together in a way that is going to be compelling and ultimately help other people. But you have to do it from that place, and not a place of “positioning”.

In the end, if you want to be successful in this world, this is what you need to do:

(Note: the last step is often the most difficult.)