Why We Need To Listen To the Under 25s 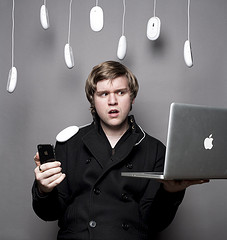 There’s been a lot of turmoil around an article published a couple of weeks ago by Cathryn Sloan, entitled, “Why Every Social Media Manager Should Be Under 25”. This young woman took a bit of a raking over the coals about her article, which basically attempts to make the point that the younger generation knows more about things like social media and technology than us old fogies and that they should be given more a chance in the workplace.

Many a rebuttal was written about how shortsighted Sloan is, that she doesn’t know any better, that she’s got that classic sense of entitlement that “kids these days” tend to have. Most of the comments, of course, came from old farts like me (sorry, anyone over the age of 35, I’m talkin’ about you.).

I see this in different way than most my age, and I’m going to attempt to make my point by sharing a bit of my own story.

I got my first full time job in the industry of my choice (television) when I was 19 years old. I was thrust into the working world, where my responsibilities included producing 5 television programs for a local TV station (which at cable means doing all the technical and production work). I had to teach people twice and three times my age how to operate a camera, a sound board, and edit video (analog, of course!). It was a huge amount of responsibility for someone who was technically still a teenager. But I got the job because someone took a chance on me.

I had little/no experience. I fumbled a lot. But, I had a support team of about 5 other colleagues who all had 10-15 years more experience than I did at the time. They believed I could do it and accepted my mistakes, and worked with me to help me learn and grow. And grow I did. Within 5 years I had won the top award in Canada for producing community-based programming. I owe much of that success to the people who helped me and coached me and accepted me at that young, young age.

Today, after a career that is creeping up on 23 years, I’m still immensely grateful for those people that took a chance on me when I was just a kid. Now I am one of the old fogies. I’m also an old fogie that teaches college students (average age 17-25 years old), and as a result, I spend an inordinate amount of time with this age group. While it’s true, some of them are shortsighted (after college I will know EVERYTHING!) and still others have that sense of entitlement, but there are many bright lights too. Many of these kids are bright, focused, and creative. And they DO intuitively get technology in ways that you and I cannot and will not ever understand. Do they have the life experience and business savvy to jump into management positions? Absolutely not. But they do have plenty to offer. I believe, deep down, that’s the point that Sloan was trying to make.

The other day I met with a former student and his fiancée for a drink after work. While they are now a slight bit older than the “under 25” category, they are still by most peoples’ definitions “young”. As I listened to them talk about the directions their careers are taking, and the exciting things they are working on, something struck me hard.

Yes, my 23 years of working in my industry of web, communications and media has brought me to a point where I have experience and confidence and ability. That is reflected in the opportunities I am offered and the money I make. I have life experience on top of that, and it’s helped me grow personally and professionally. That is the kind of experience you can ONLY get from working and living and putting in your time. Nobody can argue with that.

However, we are still so quick to discount and disrespect younger people. We automatically shift into this attitude that we know more, and that anyone under the age of 25 just doesn’t get it. Come back in 15 years when you have some real life under your belt, kiddo.

Who has the sense of entitlement now?

Instead of brushing off people like Cathryn Sloan, perhaps we should start listening to them a bit more often. While they may not be ready to head up a department or manage 10 employees, in my experience, the majority of young people are really, really insightful. They really DO get this stuff on a level that we don’t.

If you can step down off your soapbox for 5 seconds and actually start listening to what younger people have to say, you’ll discover that they know a lot more than we give them credit for. Do they sometimes have an attitude that needs to be taken down a couple of notches? Sure. But heck, I was 21 once too. My mentors made me check my attitude on more than one occasion (some would argue they still do!).

So, before you pat those under 25s on the head and send them on their way without an interview, think for a minute. Think about what they actually might have to offer you.

I’ll tell you what my students and former students have to offer. A fresh perspective. An inherent ability to understand how to use technology. Creativity. Lack of assumptions. Problem solving skills. Fearlessness. Boundless energy. Cleverness. All things us old folks sometimes forget to have as we age.

Now just think of the possibilities, if you take those traits and mix them with all of your seasoned years of life and work experience. It’s a very, very powerful combination, don’t you think?