Why I Give A Crap About What You Ate For Lunch

When people are first getting into the whole social media thing, they’re often a bit cynical.

“Twitter is just a bunch of people talking about what they had for lunch.”
“I don’t want to know details of your kid’s stomach flu, dear Facebook friend.”
“If I see another cute cat video on YouTube, I’m going to flip out!”

Yep. As much as there is a world of amazing information, conversations and people to be found via social tools, there’s a lot of seemingly inane chatter going on too. Lots of people wonder what the point is. They say don’t understand why they’d want to know about any of this stuff. They say they don’t give a crap about what you had for lunch.

It’s too bad, really. Because if it wasn’t for all that so-called “inane” chatter, I probably wouldn’t even use social media.

Some of the richest conversations I’ve had have been about things like food, tea, pets, wine, and TV shows. Some of the best friends I’ve made, I’ve not made because I’m sitting around all day long doing “business” on Twitter. We’re friends because we’ve shared things about our lives with each other. Some of the most important client connections I’ve made, I’ve not made because of a tweet about my company. I’ve made them because of things like a tweet about the lemon meringue pie I baked last weekend.

You see, what makes social media so rich and compelling, is not people just doing “business” and being “professionals”. It’s people being…wait for it….people.

Bow WOW.
The other day, I was cruising through some Twitter posts while I was waiting for my class to start. I came across a post that had been retweeted by my pal @PrincessDoubt. 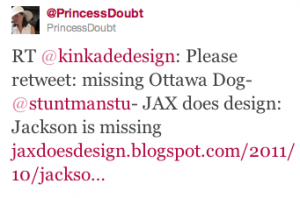 Being a dog lover, I clicked on the link immediately, and discovered that Jackson had gone missing at Bruce Pit, the dog park where I take our dog, Charlie. It broke my heart to know that Kelly (who is a stranger to me, incidentally), had lost her dog. I re-posted on Facebook and Twitter, hopeful that if enough people spread the word, someone would find Jackson and help him get home.

The next morning, I checked in on Twitter to see if there was any news from @jaxdecor and found this:

What a relief! It turns out Jackson was able to find his own way home. Miraculous!  (Here’s the full story, if you’re interested.)

I went on about my day.

That conversation had nothing to do with business (though me, @PrincessDoubt and @JAXdecor are all business people). Nobody made any sales. Nobody got extra “impressions”. There was no “ROI”. There was just life.