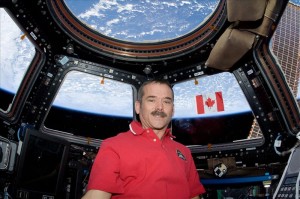 If you’re anything like me, you’ve been watching with interest as Commander Chris Hadfield has been hurtling around our planet for the past few months on the International Space Station. While it’s pretty amazing that we are even able to have humans floating around in space, what I think is even more amazing is how Commander Hadfield has been able to share his experience with the world in an unprecedented way through social media.

Hadfield, along with being an astronaut, is also a musician and photographer. Which means that not only is he able to do one of the most dangerous and complex jobs in the world, he’s also able to produce content about it. And produce he has.

Commander Hadfield, in addition to doing his regular incredibly busy, demanding, and risky job, has also made the time to produce stunning photographs, send tweets, and create music to share with us. Every day our streams have been filled with spectacular, never-before-seen views of our planet. His photographs are consistently breathtaking. Over the past several months, he’s sent hundreds of images of our planet from space to Earth, and has shown us the beauty, magnificence and fragility of our only home.

And lucky for us, he somehow managed to smuggle a guitar on board the ISS, and shortly thereafter, started posting videos of his music. His song, “Is Somebody Singing”, became a viral hit, when he did the first ever live musical duet between Earth and space with Ed Robertson.

Not only that, but Hadfield has posted dozens of videos explaining the effects of weightlessness on everyday things, like fingernail clipping and crying. His “Mixed Nuts in Space” video has amassed over 5 million views. He and his crew have hosted Google Hangouts, he’s done cooking shows, and had Earth-to-Standard-Orbit conversations with everyones OTHER favourite spaceship captain, William Shatner. He’s talked to students around the world. Do a Google search – the amount of content this guy has put out in his 5 months on the ISS is astounding. It’s a real testament to what’s possible when one puts their mind to telling a story.

How to Be a Social Media Un-Guru

Commander Hadfield has leveraged technology across platforms – Twitter, YouTube, and Google+, in particular. He’s done this, in spite of having an extremely demanding job and while floating in space, for Pete’s sake! But why? What does Chris Hadfield hope to gain from this? Is he extending his personal brand? Hoping to leverage online platforms to build a successful post-orbital business? Building a comprehensive social media strategy that’s going to land him a 10 book deal and a regular gig on the international speaking circuit?

Well, no. Chris Hadfield has not been trying to become an Internet sensation and a social media guru. All he’s done is shared his passion with us. He’s used technology to share with us the story of our universe, and he’s done it in an extremely compelling way.

And that’s really the point. Yes, goal-setting and strategy are important if you’re going to figure out how to be successful with digital. But it doesn’t matter how much strategizing and planning you do – if you have a story to tell, there’s a certain point where you just have to get out there and start telling it. Figure out which channels work for you – for Hadfield, he’s done great with Twitter, Google + and YouTube. But he doesn’t feel the need to blog every day, and he doesn’t need to (and neither do you, unless that’s what fits for you).

Don’t delve into this world if you’re not passionate about the story you’re telling. It’s simply not worth it, and your effort will come across as insincere and flat. Hadfield shares his stories out of a place of total passion. He is as awestruck as the rest of us about what he’s seeing and experiencing, and that makes us feel a real connection to him. The story of our universe exists whether Hadfield is there or not, but he’s our conduit.

Finally, stop making excuses about not having time, energy or ideas. If you are truly passionate, and really do want to succeed, you will figure out a way to make the time, find the energy and cultivate the ideas. If Chris Hadfield can produce oodles of great content from frickin’ SPACE, then none of us who really are passionate and want to succeed in the digital world have ANY excuse not to do it too.

Ultimately, you need to strike that balance between strategizing and thinking and planning and actually doing. Stories exist whether you’re there or not – but if you become the conduit, how does that change things? Because as Chris Hadfield has taught us all, having and sharing our own unique experiences is really what life on this planet is all about.

Welcome home, Commander Hadfield, and thank you for sharing your view from up there with all of us down here.

Oh, and if you haven’t seen this yet, watch. It just might be the single greatest music video of all time.

Are You Publishing Content or Producing Stories?
Fighting for Attention
How To Be More Memorable