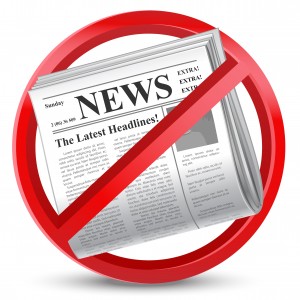 Taking a Break From the News

I have always been a self-professed news junkie. Just ask my husband, who I force on a daily basis to sit in front of the nightly newscast on TV. Or look at my Facebook or Twitter streams, chock full of the news feeds from newspapers, online publications and TV news. I’ve always thought that consuming the news was a good thing. After all, as my father says, “You gotta know what’s going on in the world.”. But recently, a friend of mine mentioned that he doesn’t look at the news. At first I was kind of shocked. How could one go about their day not knowing what’s “going on in the world”? What if something major happened that everyone MUST KNOW RIGHT NOW???

Later that day, I sat down to get my fill of the evening news, and to be quite honest, it was not a pleasant experience. People killed in car accidents. People getting arrested or on trial for heinous crimes. Political battles. People complaining about things. Animals being abused. There was maybe one positive story for every ten negative ones. I got up and turned off the TV. And I haven’t looked back. For the past couple of weeks I haven’t looked at the news once. I removed all of the mainstream news sources from my online streams too. I just gave it up, cold turkey.

So how has life been since going on my crash news diet?

I don’t miss it.
Not once have I been in a situation where I thought, “gosh, I miss knowing what’s going on”. Not once.

I’m choosing differently.
I’m finding new and interesting things to read online. Things like Brain Pickings, and I $@#%ing Love Science. The stories on sites like these are newsworthy, but not sensationalized. They are inspirational and educational.

I’m happier.
I didn’t realize the impact looking at depressing news every day was having on my life. But it’s been significant. And as someone who suffers from depression, doing things that don’t depress me is, well, logical.

Originally, I was just going to give up news for a few weeks, to see what happened. Now, I’ve decided to make it permanent. I no longer need the news. And it feels good.