Playing in the Sandbox of Creativity 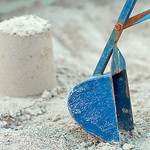 I started SuzeMuse in 2006. I literally chose the name when I set up my first WordPress blog. The sign up form was sitting there, staring at me, waiting for me to type something. Given that “Susan Murphy” is a rather common name, it was, of course, already taken.

Suze is a nickname my Dad gave me when I was a kid (and one many people have called me since). I figured that this blog was going to be not a lot more than me ‘musing’ about life, the Universe and everything….so SuzeMuse it became.

That’s about as much thought as I put into my “brand”.

I carried the handle over to social networks when I started there, mostly out of convenience (who wants to remember multiple sign in IDs?). But again, as I ventured in 2007 into the world of things like Twitter and Facebook, I found that the name sort of stuck. I’d go to events and suddenly I wasn’t known as Susan or Sue. I was “Suzemuse”.

The reason I say all this is that, way back then, when I was just getting interested in this social media stuff, I didn’t agonize over what I was going to call myself, or how I was going to develop my personal brand. I was sandboxing.

Back in 2006, there weren’t a lot of people talking about social media. Well, there was Chris. And he had a lot to teach us (and still does). But 99% of what I learned about WordPress, Twitter, Facebook, YouTube, communicating online, talking in 140 characters, writing a good blog post? I learned it from fussing around with it.

I was never afraid to mess around with the media. I was frustrated when I broke stuff, but I was never hard on myself about it. I just cleaned up the mess, learned from it and move on.

I read incessantly. Hours a day on blogs and books. I listened to podcasts. I watched videos. Nobody told me which ones to watch. I found them by looking around and I listened to the people who resonated with me.

I played. And I played some more.

I spent hours and hours filling my bucket with sand. One small plastic shovel full at a time. Eventually, I had enough sand in my bucket to flip it over and build a piece of the wall. Over time, I filled more buckets, and the wall started to get higher. The castle began to take shape. Then a remarkable thing happened.

People started to come and visit. They left comments. They @replied to me. They shared what I was saying with others.

My sandbox had become a place that others wanted to play in too. It took a while, it took playing in it every day on my own, until someone else came along and asked to play too. But my perseverance paid off.

Eventually, these connections, this sharing…evolved into something else I didn’t imagine happening. New opportunities for my business started to emerge. People enjoyed visiting my sandbox, saw so much value in what I was doing there, that they were willing to take the relationship to the next level (the one that involved money).

Again, I didn’t set out to do any of this. I went in with my “play to learn” attitude. I’ve never lost that. This blog is still my sandbox. It’s still an experiment. I learn here, then share what I know with my students and clients.

My newest experiment is, I’ve set up a Facebook page for this blog. Will it work? I haven’t a clue. But I’m going to try to share more stuff there. I’m making my sandbox a bit bigger, to see what I might be able to learn from that too.

So, what’s in your sandbox?