Pay Attention to the Background 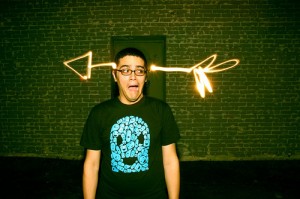 Back in TV school, I was taught that when framing up a shot, it’s really important to look at the background. Even if the framing of a shot is perfect, if something weird is going on in the background, it can ruin everything. It could be a cable from a light running across the floor. It could be a person goofing off at their desk, or a strange looking shadow. It could also be a case of bad juxtaposition – when a stair rail, or a picture frame “cuts” through the back of someone’s head. If you don’t focus on the background, then the perception of what’s in the foreground can be completely lost.

I think a big part of the problem with the reluctance of many people to adopt social media is that many people are not spending enough time focusing on the background.

How’s your DOF? There’s an expression used in film, video and photography known as Depth of Field. Specifically, it refers to the amount of distance between the nearest and farthest objects in the frame that appear in sharp focus in an image. So, if you have a shallow Depth of Field, it means that you’ll see one object clearly in focus, while all other objects in the background appear out of focus. On the other hand, having a deep depth of field means that everything in the picture appears to be relatively in focus, whether it’s up close to the foreground or far in the background.

Part of what freaks people out about social media is that by nature, it is exposing. There’s no shallow DOF in social media. It’s all quite deep, in fact. Successful social media is not about companies interacting, it’s about humans interacting. And that means there’s going to be an endless mix of dimensions, tastes, activities, comments, questions, and information. Some of it may be junk to you. Some may be of incredible value to you. But the fact is, social media is vast, and deep, like a photograph where you can see for miles and miles and miles. And that scares a lot of people.

Consider your online interactions for a moment. Who are the people you relate to best? Are they the ones who only show you a little bit of themselves, and keep the rest a closely guarded secret? Or are they the people who present a clear picture of who they are, from all angles, flattering and not-so-flattering?

Social media has deep, deep Depth of Field. The people and companies that are most successful in the medium are those who accept that. Their lens is not focused on one one object. It’s focused on the vast expanse and potential of each interaction they have.

Juxtapose this! I remember one of my profs in TV school equating juxtaposition to that classic gag that comedian Steve Martin made famous. He always said “You don’t want to be the guy with the arrow through your head”. When framing up a shot, you need to be totally conscious of what’s happening behind your subject. If there’s a picture frame, or stair rail, or any object, appearing to stick out of, or cut through the back of someone’s head, it makes them look silly. And nobody wants to look silly.

If social media is all about genuine relationships and real conversations and actual human beings, then it stands to reason that occasionally, even the best intentioned people are going to look silly. It doesn’t matter whether you are the CEO of a Fortune 500 company, the owner of a flower shop in rural Iowa, or a PR flack trying to build your professional network and generate leads, when you choose to engage on social media platforms, you need to be prepared to open yourself up to the possibility that someday, what you say in the foreground, and what’s going on in the background won’t match.

But that does not necessarily have to be a bad thing. Some of the most fascinating and dynamic people I know online are that way because they accept that the image everyone sees in the foreground is completely subject to what’s happening in the background. That means, if someone is having a bad day in the background, and that surfaces, so be it. If someone is super busy and just trying to keep up in the background, it might mean they have to reframe things. All of this is real life, and all of it’s more than okay. We need to be accepting of everyone’s juxtaposition.

What I think is at once amazing and frightening about social media is that it’s totally raw. The people who use the medium most successfully are completely in focus at all dimensions, and they are not worried that sometimes things are just going to line up in funny ways. They deal with it, and move on.

I am hopeful that as more people begin to understand this new medium, they will be more inclined to present the wide angle view of themselves. For often, what’s in the background is far more compelling than a shallow little dot of focus.

Are We Too Focused on the Next Big Thing?
Generation Social: A Social Media Documentary You Must See