One Man’s Trash is Another Man’s Story 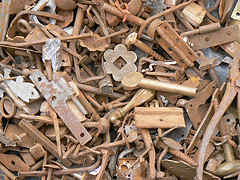 I love Antiques Roadshow. I’m not kidding about that. I can watch for hours and hours without getting bored. I have no particular preference over the U.K. or U.S. version. To me, it’s all about the content. These days, shows about “one man’s trash” are becoming increasingly popular. Pawn Stars, American Pickers, and Auction Kings all top the list of shows I never grow tired of.

Why the fascination with other peoples’ junk? It’s the stories.

Every House Has a Story
One of the many hats I wear is as co-producer of a television series called The House Healers. The premise is simple – The House Healers take the most run down, ugly, and dilapidated houses they can find, and transform them into beautiful, livable, green homes. Our renovation projects are not the “one week, use the cheapest materials possible and just get the job done” renos. They are not the “hire 600 people and Ty Pennington to knock down the house and build a whole new one” renos. We bring our viewers the real reality of renovation, where it takes 10 months, thousands of dollars, and buckets of blood, sweat and tears to make it happen.

In the first season of our show (we’re on season 3 now), The House Healers bought their first flip house, a 105 year old home in the west end of Ottawa. The house was in a sorry state of disrepair, with the last update done probably sometime in the 1960s. The house had stayed in the original family since it was built, and the woman who lived there had been there since her late husband’s grandparents had sold them the house some 60 years prior. Since she was elderly and no longer able to live in her family home, it was sold to The House Healers with a promise – that whatever they did, they were not to tear the house down. (Note: It probably should have been torn down).

On the first night of demolition, we were filming in the upstairs of the house. The dust of 105 years was thick in the air. Pieces of doorframe and wall and floorboard were flying. One of the team pulled a bookcase down and a small leather pocketbook slipped to the floor. We opened the pocketbook to find old postcards, a dried corsage, and by far the coolest thing – an invitation to lunch at Buckingham Palace, dated 1936.

We carefully put the pocketbook away for safekeeping, with the intention of giving it back to the original owners once the renovation was complete and the family came back to see the finished house. But for the next 11 months of the renovation, we wondered about that pocketbook. Who went to Buckingham Palace and why? Where were those dried flowers from? Surely there was a story.

The reason I love making this show is because every house has a story to tell. Every time I walk into a new renovation project, I wonder about the people that lived in that house before. Every time I admire the amazing transformations the team is able to produce in the homes they renovate, I think of all the work and thought and planning and effort, and stories of how they got to this point. I’m really lucky to be part of something that can document this process, and tell the story of how old homes get new life.

What’s Your Story?
I love old things because they always have a story, and it’s the most exciting thing to draw that story out. if I had a bigger house I can assure you it would have a lot more “other man’s trash” in it (don’t tell my husband).

Thinking about the stories the things in our lives hold is fascinating. It’s why I often get confused when people tell me they have creative blocks. I think there are so many stories to tell, that it would be impossible to run out. One just has to look around them to find stories in the simplest things – that coffee cup on your desk, sent to you from a friend far away. The big black dog, now laying at your feet, abandoned 7 years ago in a snowbank. A small leather pocketbook, fallen behind a bookcase 70 years ago.

Everything has a story.

What story are you ready to tell?

By they way, if you want to find out the rest of the story of that leather pocketbook, you can watch this.