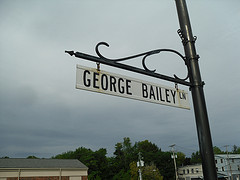 My favourite movie of all time is It’s a Wonderful Life. I bet I’ve seen it 100 times. Once, I watched it 4 times in the same day, back to back. Every time I see it, I wind up in tears at least 3 times. I have much of the dialogue committed to memory.

One of the things I love about the film are all the things the protagonist, George Bailey, has to teach us. Every time I watch it, I have another realization that sticks with me. I figured it was high time to sum them up, so here are some of the things George Bailey has taught me.

Do the right thing, even if it’s not popular.
Near the beginning of the film, a young George Bailey is working in Mr. Gower’s drug store. Mr. Gower is noticeably upset, and George goes to check on him. Gower tells him to take a prescription to a customer. As George picks up the medicine box, he looks and sees that the pills Mr. Gower has prepared are actually poison. He runs out of the store, not knowing what to do. When he returns, not having delivered the medicine, Mr. Gower punishes him harshly. Once George explains the mistake that’s been made, Mr. Gower realizes what he’s done, and is profoundly sorry, and grateful to George.

George knew he was going to get in big trouble for defying his boss, but he also knew the consequences of listening to him. He took the chance and did what he knew was right. Not only did he save a young child’s life, but he also prevented Mr. Gower from going to prison.

We all want acceptance. We all want to avoid conflict or trouble. However, sometimes we have to make the tough decision to go against the popular belief. Sometimes we have to run head on into trouble because we know that it will be better in the end. Sometimes doing the right thing isn’t the popular thing. And like George, we need to be okay with that, and do it anyway.

Walk your own path.
George Bailey, as a young man, had dreams of going to college, and traveling the world. When his brother Harry, who was supposed to take over the Bailey Building and Loan, arrives back in Bedford Falls with a wife and plans to move away for a big job, George is left, once again, holding the bag. This realization is very upsetting to George. His Mom, seeing this, points him in the direction of Mary Hatch’s house. She feels that the next logical step in George’s life is for him to finally be with the woman he’s meant to be with. George has other ideas. Even though, deep down, he already loves Mary, he turns away from her house and walks the opposite direction. However, as we soon find out, George ends up at Mary’s house. And so begins their happily every after.

As much as George was starting to resign himself to the fact that he would end up spending his life in Bedford Falls, running the Building and Loan, he was very resistant to walking the path everyone wanted him to. But even though he ended up staying in Bedford Falls, marrying Mary, and having a family, he went about it all his own way. In the end, he found his own truth. Nobody told him how to get there, but he ended up exactly where he was supposed to be.

You don’t need to be like anyone else, you just need to be you. Like George Bailey, you may stumble along the way, but ultimately the time and effort it takes to get there will be worth it. Carve your own path. Your life will be richer because you made this journey in your own unique way.

People first, money second.
How much do we hear these days about the “human” side of business? Everyone tells us that faceless companies cannot exist in this connected world. But George Bailey….George Bailey knew that, even back in the 1930’s! Let’s take a look at how George operated his human business.

George’s father dies the night before he is to go off to college. He puts college on hold to sort out his father’s affairs with the Building and Loan, and as he’s about to leave, his arch-nemesis, Mr. Potter, reveals that he would like to dissolve the Building and Loan, deeming it unnecessary. The Board turns down Potter’s request on the condition that George stay on to run the business. George gives up college and ends up staying, because he can’t bear the thought of people having to crawl to Potter for money to build their homes.

Over the next several years, George helps people like the Martini family and Ernie the cab driver buy houses for their families, because he believes that people should have opportunities to improve their lives, and that life does not have to be a struggle, especially for money. And, when the stock market crashes and the bank calls his loan, George and Mary don’t even think twice before using their honeymoon savings to help their customers.

The Bailey Building and Loan was the original human business. George always thought about how he could help people first, and he worried about the money later. As a result, he had loyal customers and was well respected in his community. Potter, on the other hand, was a “warped, frustrated old man”, who only cared about himself and his money. It’s pretty obvious who had the better life.

Don’t let anyone step all over you. Ever.
George stands up to Potter four times in the movie. The first time is when he is a kid and he runs into the office to ask his Dad for advice about Mr. Gower’s medicine, as Potter is chastising his Dad. George yells at Potter, tells him his Dad is “the biggest man in town!”, before being shuffled out of the office. The second time is when Potter tries to dissolve the Building and Loan after George’s Dad dies. The third is when Potter tries to buy out the shares of the Building and Loan after the stock market crash. And finally, he tells him off one last time when Potter offers him a dream job and tells George “his ship has just come in.”

Every time George stands up to him, Potter is either pushing down someone George loves, or he’s trying to push George himself down. George can’t stand the way Potter treats people. Even though George is so angry and disappointed that circumstances have forced him to give up his life’s dreams, he’s not about to let Potter get the best of him or anyone else.

There are a lot of people in the world that think they are powerful. But nobody, nobody has power over you. Always have the courage to stand up when you feel you or someone you care about is being treated poorly. The bad guys can never win this way.

You mean everything to so many.
The message of the movie is everyone’s life is precious, because every person’s life touches so many others. Everyone’s life is wonderful, and something to be cherished. At the end of the movie, Clarence Odbody, George’s guardian angel, leaves George his copy of Tom Sawyer. Inside, the inscription reads, “Remember, no man is a failure who has friends.”

I think this fact is more true than ever in our new, connected world, don’t you? I have met so many people in the past 4 years of my life that I would have never otherwise had the opportunity to meet. I have friends who have affected and changed my life in ways they don’t even realize. George Bailey learned what it was like to live in a world where he didn’t exist. Every day, the ability to connect with anyone, anywhere, reminds me how peoples’ lives are changing and being made better by the intersection of their existence with so many others.

I am so grateful to each of you – to those I have met, and those I’ve yet to meet. It means so much to know that each of you, in your own way, you have made a contribution to my wonderful life.