Is the Social Web Making Us Too Dependant? 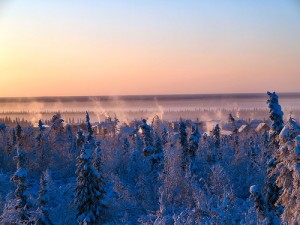 When I was growing up, it was sometimes dark all day.

Because of my Dad’s job, we lived in small, isolated communities, including the Canadian Arctic. When you’re an active kid, it’s 50 below, pitch dark at 1pm, and there’s one channel of television, you have no choice but to find resourceful ways to fill your time. In spite of the perceived lack of stuff to do, being “bored” was not allowed in our house. We had tons of books and crafting supplies, and if I still couldn’t find something to do, then a toilet brush and mop were always close by too. I was given choices, but ultimately, my parents mostly let me and my brother figure out stuff on our own. It’s one of the best lessons they ever taught me, because today, I’m very independent. I have a “figure it out” attitude, and it’s driven me directly to the successes I’ve had to this point.

Thanks, Mom and Dad.

The past 10-15 years has seen a social transformation like at no other time in history. Even the printing press and the telephone, both inventions that revolutionized the way we communicate, were unable to connect people the way the Internet has. The phone and the press are two-way interactions. The web is multi-way. And that’s the difference.

I’m astounded on a daily basis at the way we’re all able to connect out here. I am blessed to have so many strong friendships and to be able to do business with so many remarkable people. I think we are all aware of what a brilliant space this is, and how fortunate we all are to be here together.

For all the wonderful things the Web has brought us, there have also been some unfortunate side effects of this always-on dialogue we’re having. The other day I discussed the Culture of Free. Chris has been talking about the problems with Anywhen. Frustrations are growing at a rapid rate in the Twittersphere with noise ratios and spam on the rise. There’s one other unfortunate trend I’m seeing, and it may be the one that concerns me the most.

Hold my hand, I’m too scared. Yep, the Web can be a scary place sometimes. I’m not just talking about trolls and malicious web sites; we have thousands and millions of gigabytes of information thrust at us on a daily basis. The stream is active 24 hours a day,  7 days a week, and there’s pressure (mostly self-imposed) to keep up with the flow (and the Joneses). People get stressed because they might miss something, or might not understand the next new thing when it crosses their path. They are afraid they’re not going to be with the “in-crowd”. And unfortunately, what happens is, they start to lean heavily on others to calm their fears. They send emails at all hours of the day and night (and then re-send them if you don’t respond right away), asking what happened here or what to do about this or for advice on that. They tell you they are “not tech savvy enough” and expect, because you might be, that you can just tell them all the answers and solve their problems.

Oh sure, it seems innocent enough at the beginning. A little free advice never hurt anyone. But if you’re the resourceful type, you probably spend a good whack of time out here on the Web, reading voraciously, experimenting with new tools, refining your use and knowledge of the existing ones, and taking your knowledge and experience to the next level all the time. You have a day job too, so most of this hunting and poking and learning occurs when most sane humans are sleeping. So when someone grabs onto your hand and won’t let go, it gets to where it slows you down. After all, if YOU can get out there and put in the hours to figure it out, why can’t the hand holder do the same? Before you know it, resentment sets in, and suddenly, in our social world that is so much about being helpful, you don’t want to help so much anymore.

It’s time to take down the pedestal. The great irony here is that the Web contains all of the answers, but unfortunately there is a culture of pre-occupation and laziness afoot that makes people not want to bother to find things out for themselves. After all, that’s what all these people are for, right? You know, the social media experts, the gurus that give away all this info for free but also write books and things. But heck, I am too busy to read. I’m too busy to put in the time to go and research and just install the stupid thing and play around with it and break it until I get it right. I might as well just go to the source, and get the answer from the horse’s mouth, right? That’s easier, and way faster.

You might be thinking “No way, that doesn’t happen. People aren’t that rude.” In normal social circles (i.e., in person), you’re absolutely right. People aren’t typically so rude when it’s face to face. But you see, people like to hide behind their computer screens. They’re more ballsy when they’re not walking right up to you. Social graces are pretty much the first thing to go when you throw the anonymity of the Web in the middle.

Not only that, but we continue to put people up in some sort of social throne, and then fully expect their wisdom to be handed out on demand. We don’t consider where that wisdom came from (hard work and independent study and experimentation). We just want to know it, and we want to know it now. After all, we’ve got our own success to consider, our own bestsellers to write. Hurry, hurry hard. Get to the end of that tunnel using the fastest means possible, which for some reason, we’ve decided, is by picking brains, instead of picking up a book.

So, what’s the solution? I don’t know yet. I do know that a significant culture shift is going to have to happen. The social media bubble is about to burst. People are reaching their breaking point of free, of personal time, and of noise. I know I am. But what I do know is it rests firmly on our shoulders to figure out what to do next. Each one of us needs to evaluate what we are getting out of this space. We have to go back to the basics, of balancing our level of effort versus our individual payoff. Instead of doing the ROI on your social media campaigns, do the ROI on yourself. Remember why you got in here in the first place. Throw out the stuff that isn’t working for you anymore. Streamline the stuff that does.

[photo credit: 40 below in Inuvik, by Eclectic Blogs on Flickr)

Share:
Category:social media, Uncategorized
Tag:dependancy, independance, inuvik, social media, social web
PREVIOUS POST
The Culture of Free and Why it Needs to Change
NEXT POST
Can We Be Helpful AND Scale?