I Want to Know What You Had for Lunch 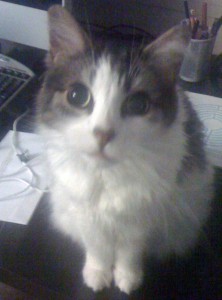 My, my, but we’re a serious bunch.

This post is inspired by a YouTube video that my Twitter buddy Geoff Livingston posted recently. The video is called “20 Silly Twitter Remarks” and if you want a good chuckle, take 3 minutes and watch it. As I was watching, two thoughts occurred to me. First, for someone who isn’t on Twitter, these comments would probably seem even more absurd. Second, for the people who said those things (no attribution was given, but a few were recognizable to me), one of two things will happen. Either they’ll laugh right along with everyone else, or they’ll freak out, and get all hot under the collar about the fact that someone’s poking fun at them. I hope it’s the former, I really do. But past history of posts such as this dictates that someone is bound to get their knickers in a twist. I hope I’m wrong. Kudos to Geoff for being so darn funny and entertaining on camera. I hope he does many more like this.

Business on the Sides, Party at the Back. Ahhh, the mullet – signature hairstyle of the average dude in the 70s and 80s. You had one. C’mon. Admit it. (I may have even had one for a while, but let’s not go there!) My theory as to why the mullet became popular was because it was deemed “acceptable” in the workplace. Companies didn’t want any long-haired hippies wandering around, so men started to chop the front of their hair short, to look more professional, but they left the back long to show that they still had a less serious, wild streak.

The ability to genuinely laugh at oneself is charming, endearing, and sexy. But I think that often, especially in the online world, we’re trying SO HARD to exude a certain type of “personal brand”, that we forget that it’s okay to be silly once in a while. It’s okay to poke fun at ourselves, and even sometimes at those we respect (as long as it’s not hurtful). Remember when you were a kid, and that girl or boy on the playground would tease you incessantly? You’d go home and cry to your Mom about it, and she’d say “Oh, that means he/she likes you!”. Most of the time, that’s true. If someone teases you, it’s often a show of respect and admiration. Take it as a compliment. Of course, then tease them right back, to show that you love them too!

So, sometimes, be a little less business, and a little more party. You’ll probably make some new friends, and for sure, you’ll have a lot more fun.

Nobody Cares What You’re Having For Lunch. Or do they? I had conversation with a colleague the other day about Twitter. He is still working on figuring Twitter out, understanding how it fits into his day-to-day life, and how it can benefit his business. He told me that he had some reservations about being too “personal” in the social space, but at the same time he wanted to ensure he wasn’t just being that guy pushing his links out and not interacting. He was a bit stumped as to what he was supposed to be talking about. I said “Tell ’em what you had for lunch!” Naturally, he looked at me like I had three heads.

Lots of “social media experts” will tell you that you shouldn’t talk about what you had for lunch on Twitter, because nobody cares. You shouldn’t post pictures of your cats – you’ll look like that crazy cat lady. And you shouldn’t goof off – people will think you’re not working hard enough.

I guess I’m doing it wrong.

I tell people what I have for lunch. Not every day, but often. What’s that gotten me? Ideas for recipes, which is great because I love to cook. Connections and friendships with talented foodies from all over, like my friends Don and Jenn from FoodiePrints, which is great because I love to talk about food. And, I’m doing Weight Watchers, so it’s tapped me into a very supportive Twitter community and we’re helping each other meet our weight loss goals. All this, from telling people what I had for lunch.

I post pictures of my cats. Not every day, but often. What’s that gotten me? Well, I don’t have human children, so my pets are my kids. They are one of the most important parts of my life, just like your kids are. When they do something cute or funny, I want to share that with my friends, just like you want to share memories of your human kids. Lots of people seem to enjoy my pictures, and we have many fun conversations about it. My pet pictures have connected me to people who are now my clients. So I suppose I should thank my cats for being so darn cute, eh?

I goof off. One day, a couple of months back, I was taking a break from work (yes, I do that occasionally), and I was poking around on Twitter. I realized that I had 4997 followers. Now, before you start talking to me about how follower numbers aren’t important, blah dee blah – this is about FUN. I thought it would be fun to offer a special surprise for my 5000th follower, so I suggested that maybe I’d write a song. The campaign started, and while I waited for my 5000th follower to show up, I wrote this. When @MCouto finally did come along, I posted the song. People got a good laugh. Then I went on with my day. What did this get me? Well, a new buddy in @MCouto, A.K.A “Follower 5000”. And I’ve met others because I follow him. The pay off? Purely social. But purely fun.

Social media is not all business, all the time. It’s okay to use the forum to just have some fun. Share some snippets of your life, even if it’s the view out the window of the coffee shop, or off the end of the dock at your cottage. Goof off sometimes, tease the people you love a bit, or just send a hug to a friend having a bad day. You want to enhance your personal brand? Don’t try to “be” a persona. Just be you – the same you that you’d be if I was meeting you in person.

How are you going to have a little more fun online?

What Happened to the Conversation of Twitter?
Getting Personal: Is it Necessary for a Successful Online Presence?