How To Leave a Legacy 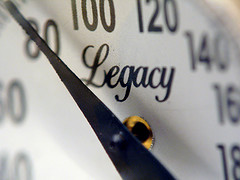 I’ve never been a hard core Oprah watcher, but I’ve tuned in occasionally over the years. I’ve always enjoyed watching the show from a producers’ perspective; it’s an extremely challenging format to produce, but Oprah and her team have been bringing it daily for 25 years.

25 years is a long time to do anything really well, let alone have a hit television show. I really do appreciate what she has been able to build. Now, as you probably know, the Oprah Winfrey show as we know it is ending its run. As a media entity, it doesn’t get much bigger than this in TV. Whether you’re a fan or not, you can’t dispute that The Oprah show is leaving behind a legacy, and I think there are a couple of things we can learn from Oprah and her team.

Exit on a high note.
We’ve all heard this one before, but how many of us actually consider our exit strategy? How many of you have had a 9 to 5 job, or a souring relationship with a client, where you waited until things got really, really bad before you finally couldn’t take anymore and had to leave?

Oprah has not waited until her ratings disappeared. She’s not sliding down the slippery slope to cancellation. She decided to call it quits while still at the very top of her game. She figured out what her next step would be, and now she is taking that step.

It’s easier to go out on a high, don’t you think? Yet many of us wait until we’ve slid down to the bottom, exhausted mentally and physically from being in an unhappy situation. Then we have to face the reality of having to crawl a long way back up to grab on to our next opportunity. We have to fix a lot of things and get rid of a lot of baggage, in order to really find that thing that will make us happy again. Whereas, if you leave on a high, it’s more like a step across to the next thing rather than clawing your way back up to it.

What if you started to move forward when you felt it was simply time, rather than waiting for the bottom to fall out of a situation? Would exiting on a high note help you leave a better legacy?

Make it about everyone else but you.
I watched Oprah’s 3rd last episode yesterday. It was done in a big stadium, with tens of thousands of people in attendance. The guests who appeared on the show were a surprise to the audience and to Oprah, so there was tremendous anticipation. It was a slick production, big budget stuff. It had its fair share of cheesy scriptwriting, but that’s to be expected. It’s daytime TV.

But what made the production classy was that the entire show was not really about Oprah. It was about the viewers. Every story that was told was told from the perspective of the viewers. The focus was on the influence of the Oprah show as a legacy, not just on how big a deal Oprah herself is. And that focus on the audience was very intentional.

There’s really only two things you need to do to build your legacy…stay on top of your game, and make darn sure that it’s always about other people first.