How To Give a Fish Legs 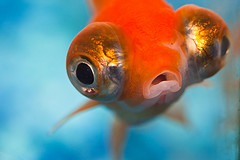 Has anyone stopped to consider that maybe the reason there’s a social media fishbowl is because nobody ever thinks to look outside of it?

I had an experience last week that made me think much differently about fishbowls (a.k.a. echo chambers) and the detrimental effects of spending too much time inside them.

A few years ago, one of our work projects came up against a technical challenge that appeared to only have one solution. We went with that solution, and although it was expensive, it seemed to be the only way to do things. At the time, it had not occurred to us that there was another way, because all of the people involved in solving the problem had reached the same conclusion – that the expensive solution was the only way.

A few days ago, the technical challenge was revisited, and someone else was brought into the mix for their opinion. They looked at the situation, and almost immediately said, “Well, you know, if you did X, it would work just as well.” This was a solution that was going to use far less manpower and did not carry even close to the same expense. It’s a solution that would have worked 3 years ago just as well as today, and it would have saved countless hours and a fair amount of cash as well.

The mistake? The person who came up with the cheaper solution was around 3 years ago too, but nobody bothered to ask him. Even though he is an expert with a respected opinion on such matters, he existed outside of our fishbowl at that time. It’s not that we didn’t want to ask him, it’s that he wasn’t directly in front of us at that moment. Had we thought to seek out outside opinions, perhaps it would have occurred to us to simply ask him for his. But we didn’t, and it cost us.

The problem with being trapped inside a fishbowl is that fish don’t have legs. They just swim round and round, seeing the same things over and over again – same fish, same plants, same pirate ship. Their world exists in this tiny environment and they can’t crawl out of it, because they have no legs (well yah, and they can’t breathe in air, but that’s another post. ; )

The fishbowl is one of the reasons I decided to take a step back from writing about social media. Ironically it’s also the reason I’ve hopped back in to the conversation. This social media love-in, guru-worshipping bullcrap has got to stop. It’s reached unhealthy levels. When I read the blog of an A-lister and 68 of the 72 comments on it are “Great post!” or “I love everything you write!”, that’s the fishbowl talking. It adds no value, and I would suspect, after a while, it makes some of the blog authors a bit tired too.

Lucky for us, we’re not fish. We can climb out of the fishbowl whenever we want to, it’s just that many of us choose not to. It’s comfy in here, right? We can tell others inside the bowl how great their blog posts are, without having to spend any time figuring out if we actually share their opinion, or if we have a different perspective to offer. We can swim around in ignorant bliss, flitting from shiny object to shiny object but never taking the time to lend critical thought to the conversation.

Without critical thought, we run the risk of the same thing happening that happened to my team during our technical challenge. We become unable to see that there might be a different way to do things. When we’re all busy patting each other on the back, we’re not looking around at others. We’re not asking the guy or gal who might just have a new way of looking at it all.

Grow some legs. Climb out of the fishbowl. Look around at others who might be offering something different, and raise them up for a while. Or better yet, offer your perspective on what they’re saying – disagree, even.

Critical thought moves conversations forward, and I don’t know about you, but I’m ready for this one to start taking a new direction.

Who’s with me? Who’s against me?