Tonight was the Ottawa Geek Dinner and I was thrilled to see some old pals and meet some new people who, until this point I had only known through their tweets and blog posts.

There were a good 20 people who came out, which made for a long table. I’m sorry I didn’t get around to meet and talk to everyone. 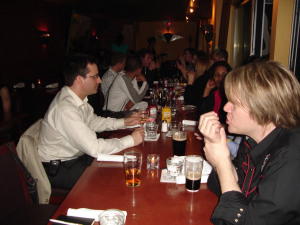 My friend Andre and I discovered a jet lagged Jeff Parks of I.A. Consultants and the Boxes and Arrows Podcast sitting at the bar when we arrived. We didn’t immediately suspect that the rest of the group had arrived so we sat at the bar and had a beer, and Jeff told us all about his trip to San Francisco’s MX Conference.

Eventually we ventured up to the second level of the Blue Cactus (who knew they had a 2nd level?) and discovered our geek friends had already settled in. I received a warm welcome from my Podcamp Toronto and Ottawa pal Mark Blevis, whom I hadn’t seen since Podcamp Ottawa in November. How is it that we live in the same relatively small city and never run into each other?

At our end of the table I had the pleasure of sitting with Bob LeDrew of Bobcat House Concerts and Flacklife. (He’s shown above with Chamika who I met at Podcamp Ottawa) He and his wife open their home once a month and host amazing musicians like Penny Lang, Tony D, Suzie Vinnick and David Gogo for intimate musical events.

I also got to meet Jay West (that’s him on the left, and my good friend Andre on the right), who I had come across on Twitter, and he had many interesting and insightful things to say, including what I think might be a record for number of consecutive years developing the same web site for the Ottawa Jazz Festival – he’s been doing it for 13 years. Would love to see the various iterations of that site over the years!

Also I was able to meet and chat with Twitter pal Simon Chen from Ramius, they are doing some really cool stuff in the enterprise/communication/community space. Check out their site if you get a chance.

All in all it was a great evening, and I’m really happy I went. I love meeting new people, especially those who I have only “virtually” met before. Thanks to Mark Blevis and Robin Browne for organizing the evening. Can’t wait for the next one!