Generation Social: A Social Media Documentary You Must See 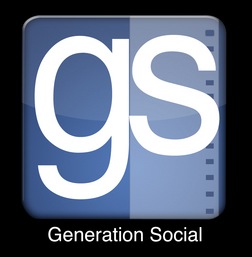 First, disclosure. Andrew Lavigne is a close friend of mine. We’ve worked together on and off for 20 years. He’s an exceptionally talented director, writer, and director of photography. Does that make me biased? You bet it does. But if you have any interest at all in social media, and the stories of the people who are making great strides in this wacky online world, I hope you’ll read this review and then go out and watch his doc as soon as it hits the interwebz.

Generation Social is the latest work by Vancouver-based filmmaker Andrew Lavigne. Andrew has been fascinated with social media and its impact on various cultures since it first became popular back around 2007. He has a strong desire to tell the stories of the fascinating people that are using the social web to do great things. And tell these stories he does.

In 2010, Andrew’s first film on social media for social good, With Glowing Hearts, told the stories of a group of citizen journalists who set out to tell their version of the story of the Vancouver 2010 Olympics. It was an amazing and inspiring tale, and I encourage you pick up a copy of the film and watch it.

Generation Social continues in line with sharing stories of those who are sharing their voices with the world through social media. It follows three people – the educator, the startup, and the social media mogul.

The educator is Alexandra Samuel, Director of the Social and Interactive Media Centre at Emily Carr University in Vancouver. Alexandra and her students focus on applied research around social media. They partner with industry leaders to find ways to communicate their research efforts through new media design and innovative means. Their latest project saw a great partnership with market research firm Vision Critical, with whom they conducted the largest study ever done on social media usage (80,000 people). What they find out about social media behaviour will definitely surprise you.

The startup is everyone’s favourite social media dashboard, HootSuite. The filmmakers follow the HootSuite team, namely CEO Ryan Holmes and Dave Olson, HootSuite’s VP of community as they journey to the South by Southwest Interactive Conference in Austin, Texas, with a goal to make a huge splash amongst thousands of social media geeks. HootSuite started in Vancouver, and not only have they grown 5 million users (including 79 of the Fortune 100 companies), but they have engaged the hearts and minds of their community through their innovative marketing. They have even charmed the likes of Mashable’s Pete Cashmore, and are a shining example of how a clever lean startup can transform into a global leader in the social media world.

The social media mogul is none other than the poster child for dot com millionaires, John Chow. John started his blog several years ago, using Microsoft FrontPage (gasp!) and hasn’t looked back. Essentially, he was dared to try to monetize his blog, and monetize he did. Within 2 years of launching, he was bringing in about $40,000 per month. Since that time he’s been sharing his secrets with the world, and raking in the cash. John’s story is one of opportunity – the opportunity that the Internet offers every single one of us who has a desire to succeed. John’s entire philosophy is, if he can do it, you can too.

What I love most about this film is it’s a story of hope. Despite all the naysayers that try to say that social media is just a passing fad, Generation Social proves that there are great people doing great things in the online world – people who are transforming not only their own lives, but the lives of others, whether through the inspirational work of bringing educators and industry together, driving connection, sharing and social change through innovative online tools, or showing how anyone can be extremely successful doing business in this space. These stories give us hope that, once the dust settles on this radical cultural shift in how we connect and communicate, we’ll be better at sharing our stories, creating social change, and simply connecting with others with whom we share this tiny blue orb.

Do yourself a favour, if you have any interest in the cultural transformation being caused by social media – go watch Generation Social. For those of us in Canada, it will be airing on CBC Television across the country on Saturday, November 10th at noon EST. For those of you who don’t get CBC, you’ll be able to watch the doc online starting Sunday, November 11th on cbc.ca (the link isn’t live yet but as soon as it goes up, I’ll share it here). And of course, you can also follow the film on Twitter.

What do you think of the cultural shift being caused by social media? How do these stories ring true to you? Let’s have a chat  in the comments.

Back to Basics: Get Your Social Media Plan on Track for 2013
TV Is Not Dead
With Glowing Hearts: A Social Media Film You Need To See