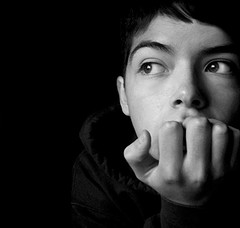 I get very insecure about blogging. I think that I don’t have anything original to say, that I’m just re-hashing stuff you can find anywhere. I’m always appreciative when people stop by to read and comment, but deep down I sometimes feel like I’m still not doing enough.

I’ve been on a journey to improve my blogging. It’s not so much about blogging more often (though I’m working on that too), but more about figuring out ways to go deeper on things, to move away from just “cranking it out” to spending more time in the thought process, before fingers ever hit keys. Here are a few things I’ve learned that have been helping immensely.

I’m not Julien Smith. I’m not Gini Dietrich. These are people I admire and look up to as bloggers. They are mentors. I learn not only from what they say, but from how they do what they do. But sometimes I get into this rut where I start comparing myself to them. I wish I could be more prolific, like Gini. I wish I could be more profound, like Julien. But you know what? The minute I start trying to be like them, I fail. Why? Because it’s impossible to be someone else. I can only be me. The ideas that percolate and the words that come as a result can only happen from inside of me.

Stop comparing yourself to the A list (or even the B and C list, for that matter). The world doesn’t want to hear a Julien Smith rip-off. They want to hear your unique voice. As soon as you get over that, you’ll instantly be better at what you do.

Last week, much to my 9 year old nephew’s dismay, I deleted every game from my iPhone and iPad. Yep, even Angry Birds. Why? Because I was spending time doing that when I could have been spending time working on things to help me think more deeply. Instead, I moved my Podcast app to the home screen and downloaded a bunch I can listen to while I’m driving to the office and at the gym, and walking to school. I took the stack of business books that were hidden at the back of a shelf and stuck them right out where I can see them, and I started reading them every day. I’m exploring new music through things like Songza, and the CBC Radio 3 podcast. Instead of filling my spare time with mindless guck, I’m filling it with mind-expanding knowledge and inspiration. It’s been a remarkable and fast transformation.

It’s mind-boggling how much time we waste doing mindless things because we think our brains need that break. Look, life is short, and our brains take a break when we are sleeping. I’m not saying you should never have down time (I still have every intention of watching The Walking Dead when it starts up again), but carefully consider how much time you’re spending on things that are nothing more than junk food for your brain. Next time you reach for the Angry Birds, stop and pick up a book instead and read a few pages, or listen to a podcast or watch a TED Talk. You get the same refreshing feeling and you won’t believe how the ideas will start to flow.

In TV, we have a concept called “garbage in, garbage out”. It means that in order for you to have a great show, you need to make sure that the input is good – good script, good camera work, good lighting, good sound. If you don’t have great inputs, your output will be crap, no matter how great an editor you are.

If you’re only filling your head with junk food, then the result of that is going to be either no output, or output that isn’t your best work.

So ditch the gossip blogs from your Google Reader, and replace them with smart people like Chris Penn, and TED Talks. Organize a list on Twitter that contains people who are smart and share good quality stuff, then spend most of your Twitter time in that list. Limit how often you head to Facebook. Change your inputs, and your output will blossom.

These aren’t changes that take a long time, either. For me, the minute I started doing these things, it changed. I’m blogging more now, and I think the quality is better. Our podcast is getting more consistent and I’m feeling more articulate. I have finally nailed down the concept for the book I want to write. I still have some things to work on, but I’m on the right path.

Spend some time finding ways to think more deeply about things. Change your inputs, and eliminate the time-wasters. Then, get in there and start creating your best work.