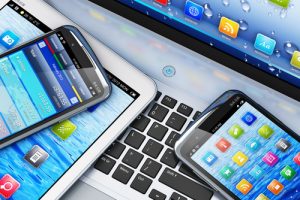 Last night I attended a jam packed Third Tuesday Ottawa, where the ever popular Mitch Joel wowed the crowd with some great insights from his latest book, “Ctrl Alt Delete” (buy yours here, it’s an amazing book!)

Anyone who knows me, Mitch included, knows that I’m one of his biggest fans. He’s one of the smartest people I know and I adore him, even though every time I hear him speak or I read his books, it gets by brain working so much that I wind up typing blog posts into my iPhone in bed at 12:50am – this time, because I can’t stop thinking about the one screen world.

Mitch’s notion of the “one screen world” is one that I think about and talk to others about often. It’s the idea that even though we live in a world where screens are all around us – giant televisions, laptops, tablets, smart phones – that ultimately, the most important screen is the one we are looking at right now. And as marketers AND as consumers, that has a lot of different implications.

Last night, Mitch went on to talk about mobile specifically. He discussed how we shouldn’t be helping people create a digital strategy or a social media strategy or a web site strategy, or even a mobile strategy for that matter. We need to be helping people figure out how they are are going to be effective using these channels that exist to tell their stories (and ultimately, sell stuff) in this new, one screen world. I think Mitch is bang on in this approach to the one screen world.

It’s one thing to stand up in front of a group of self-proclaimed digital nerds and say these sorts of things and tell us that we have to change with the times or risk being left behind. We get it. We’ve been tweeting and blogging and podcasting and living our lives online together for years. We are old timers. We are the converted, tap tap tapping away into our smart phones and nodding and noodling into the wee hours on this stuff. But we are most definitely not the norm.

The average person I come across in a week is still struggling to understand why their 6 year old web site doesn’t cut it anymore. They are still working to understand how to get their privacy settings right on Facebook (Facebook has privacy settings? Huh?). And Twitter? At least three times a week if not more I’m giving my spiel on the merits of Twitter and the difference between an @reply and a retweet. And that’s just scratching the surface. Throw umpteen other social networks the average person has never heard of in there along with a healthy dose of Dropbox and Google Docs for good measure and it’s a recipe for mass confusion, and overwhelming fear.

These “average” people I’m talking about are not idiots. In fact, they are well educated, smart, and informed. They don’t, as some would assume, fall into a particular age group. I’ve had the same conversations with 16 year olds and 60 year olds and everywhere in between.

So, if I walk in and start going on about one screen worlds and hey you people need to get this stuff when they are just trying to figure out how to fix their web site? Well, let’s just say I sometimes get a lot of weird looks.

So, when I start thinking this way, that people aren’t ready for these philosophical and physical changes to the way we do things, then I think about Steve Jobs, who said, “People don’t know what they want until you show it to them”. As a teacher and a consultant, I get that it’s my job to help people understand what they need. But it’s got to be baby steps. Asking people to take huge philosophical leaps makes them run for the hills more often than not.

I believe in the one screen world. But I don’t believe we are there yet. Why? Not because technology isn’t there, but because most people just aren’t there yet. The average person has bigger fish to fry first, not the least of which is overcoming their fears and concerns about technology in the first place. Then, they need to get to a place where they can understand enough about how it all works that they develop a comfort level with using it – in their own lives, their work, and so on. Typing a blog post into a tiny 2 inch screen at 1:00 am makes me the exception, not the rule. And the irony of what I’m doing is not lost on me either (this, after all, is my most important screen at the moment, thereby proving Mitch’s point.)

But I feel like we are going to be in this, what Mitch calls in his book, “purgatory” for some time yet, while the rest of the world catches up, and to me, that’s okay. I don’t want to scare the people who are still trying to understand if Twitter or a blog is a fit for the way they tell their stories. I’m afraid that if I jump ahead too fast, then they will freak out and run the other way and never come back.

I am okay with helping people to create social media strategies or web site strategies or video strategies right now, with an eye to what their future may hold in terms of mobile and the new one screen era we are in. We will get there in time. We are not there yet.

As for me, I’ll continue to hop from important screen to important screen, day and night. I’ll work along with and learn from guys like Mitch and everyone else who lives in the world the way we do to try and figure this stuff out, and hopefully in time, we can help others come along the path too.

Being An Optimist is About More Than Just Making Lemonade

Reduce Your Inputs, Maximize Your Output