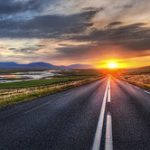 I borrowed that line from a quote I heard last night, while attending a stage show by the cast of MTV’s “The Buried Life“. Until two weeks ago, I’d never heard of The Buried Life, partly because I’m not exactly the target audience of most of MTV’s shows and partly because sometimes when it comes to mainstream TV, I live under a rock.

Anyway, I was sitting in the audience, not really knowing what to expect from all this. A bunch of hipster kids running around the stage talking strangely and hip hop dancing? Maybe. My friend  Patti and I were definitely the oldest people in the audience. Finally, the show started. Four clean cut, nicely dressed, young guys took the stage and began to tell their story of how they figured out over a Skype chat that they really wanted to do something with their lives after college. They came up with a list of “100 things to do before I die” and hit the road in an old RV to complete the list.

Over the next hour, they told stories of how they got to sing the national anthem at an NBA game, and how they got to open the six o’clock news. They talked about how they rode bulls, and played basketball with President Obama.

And then they talked about how they helped a man who had spent one third of his life on the streets get back on his feet by buying him a truck so he could run his business. And how they also helped that same man deliver pizzas to the mission he’d lived at. They also talked about how they got Toys R Us to allow them to take a group of terminally ill children on a shopping spree to get whatever toys they wanted.

And the mood of the whole evening changed.

What these four young guys were showing us was that anything is possible when you set your mind to it. Things that seem completely out of reach are not only do-able, but along the way new things will come into view and, with your nothing-is-impossible attitude, you can start to make real change in peoples’ lives. They talked very candidly and opened themselves up to the audience. They made themselves extremely vulnerable.

Then at the end of their talk, they opened the microphones and asked the audience to come up and state one thing they want to do before they die. And they might as well have opened flood gates. Young students rushed to the mic to speak. And what they said was remarkable. Some told extremely emotional stories about friends they’d lost under tragic circumstances. Others spoke of wanting to forgive. Some talked of estranged family members they wanted to reunite with. Others shared that it was The Buried Life that inspired them to bigger things, to go back to school, to make something of themselves.

There wasn’t enough Kleenex in the room.

You know, I think us old fogies sometimes take for granted that anyone under the age of 25 is only interested in video games, hip hop music, and Facebooking all day long. But you know what? That couldn’t be further from the truth. Today’s youth are smart, eager, and outgoing. Some of them have come through incredible adversity, things like war and abuse and poverty. But they are now at school, and they are learning, and striving, and making a better future for themselves. They believe something we often forget – that anything is possible if you just try.

Today is the youngest you’ll ever be. We tend to forget that as we get older, and stress and financial responsibility and kids and whatever takes over. We forget that we have dreams and goals and that often, just stepping out and being vulnerable and trying something is all it takes to get us one step closer.

You don’t need a list of 100 things to do before you die. You just need one.

Now go do that thing.

[photo by Stuck in Customs]

Back to School Tips for College Teachers