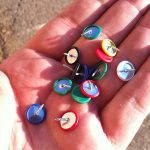 When you stop to think about it, thumbtacks are a great, low-tech way to control information. The things you tack onto a bulletin board are generally things that are important…documents you don’t want to misplace, photos of loved ones, phone numbers, and notes to remind yourself of tasks you must complete.

Back in the days before we all had computers on our desks (yes, I remember those days too), thumbtacks were an essential tool for maintaining control. But space on our bulletin boards was limited. There were only so many spots on which to tack things. Once it filled up, we had to take things down, then sort, file, or trash. How times have changed.

Nowadays, we tack things onto our computer screens. And because of the inherent nature of computers to be able to deal with a lot of information all at once, we tend to tack and tack and tack until we can barely see the important information anymore. This is especially true with social networks. When we’re first getting into the whole social media thing, we start small. We only turn the tap on a little; following a handful of people on Twitter, friending a few close friends and family on Facebook. We just tack a few things on the board here and there, and it’s quite manageable. But over time, we get more brave, and more intrigued by all the information that’s out there. And we turn the tap on a little more, and a little more, until there’s a steady flow of information hitting us throughout our days and nights. Our virtual bulletin boards fill up to overflowing.

We spiral into a chaotic spin of information overload. We can’t shut it off, and no matter what we do, how much we try to pin new stuff to our boards, it just gets more and more full till we can’t see a thing anymore.

And eventually, we run out of thumbtacks, too.

Regaining Control of Your Board

One of the complaints I hear more and more about social media is that people feel they are losing control – that the stream of information is just so vast that they can’t possibly keep up. On top of that, there’s tons of stuff in that stream that is negative, isn’t useful, or is counter-productive. I’ve had the most trouble lately with the latter.

I’ve been filtering my social stream for some time. I have lists set up on Twitter to capture posts by certain people I want to see on a regular basis. I remove posts from my Facebook stream that I’m not interested in seeing. I keep my circles tight on Google +. My RSS Reader is lean and mean, containing only those items that I know I read consistently. The rest, if it’s important enough, will find me, because enough people will be talking about the really good stuff that it will eventually be in front of me.

But I was still dealing with a tremendous amount of junk. People just being negative in general, spending their time harping on everything that is wrong with the world, or with social media, or with Ms. A-List blogger. Bloggers griping about how they’ve been done wrong, or how everyone else is doing it wrong, but not actually doing anything constructive themselves. I was allowing this information to bombard me on a daily basis, and it was dragging me down. I was losing faith with social media because I was allowing my stream of information have the control, instead of the other way around.

Then I took that control back. While I’m not doing things like a great “unfollow” experiment, I am starting to be a lot more selective of what appears in my information stream. Too much negativity gets an automatic unfollow. Harping continuously on your blog about everything everyone else is doing wrong gets an unsubscribe. I’m not having any of it anymore.

I’m not trying to be Pollyanna here. I know that life is not always sunshine and roses. I know that issues come up and discussions, sometimes heated, need to be had. I’m not opposed to discussion, discourse, and debate. In fact I encourage it, because that’s the only way the medium moves forward. But I’m just going to stick to the constructive discussions from here on in, thanks.

Social media is a choose your own adventure game. You get to pick what you’re going to tack on your board, and you get to choose when to take it off.

The control is not in anyone else’s hands but yours. It’s up to you to regain it.

Your browser does not support iframes.

Today Is The Youngest You’ll Ever Be