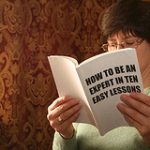 Experts get a bad rap these days.

The online culture has turned calling someone an “expert” or a “guru” into a bad thing. Somewhere along the way, being seen as an expert at something (or worse yet, calling yourself an expert), became equated to being a jerk. And I’m not sure how that happened.

Frankly, I don’t have an issue with experts. As jerky as this may sound (see, I have to defend it – weird, eh?),  I don’t mind it when I’m occasionally called an expert at something. I’m sure you don’t mind being called an expert so much either, right? (It’s okay, I won’t think you’re a jerk either). After all, like me, you’ve worked hard to know what you know.

There’s a funny contradiction here. For all the people who say, “down with experts!”, there are many, many people who actually would like to develop expertise in certain things.

My Dad is an expert at lots of things. He was an expert at what he did for a living, and now, in his retirement, he continues to develop his expertise in many things, like carpentry, digital photo editing, and Greek Mythology. Want to know his secret? Here you go….

Read, Then Read Some More

Just about every birthday and Christmas present I’ve ever given my Dad has been a book of some sort. My Dad LOVES to read. He reads and reads and reads. He’ll get into the odd novel, but most of what he reads is non-fiction, and he’s really big into history. He knows an awful lot about things like the 2nd World War, the Romans, and Greek Mythology. After he and Mom retired, they started to travel the world. He read and read and read about the history of the places they were visiting. I’d call him an expert on these things, though he may not agree. Suffice it to say he can recount historical facts and stories like nobody’s business.

My Dad has always been of the mindset that you can learn about anything you want by reading – and this was before the Internet!

Today, we are so fortunate to have access to anything….ANYTHING we want to learn, at our fingertips, 24/7. Libraries full of information are literally in the palm of our hands.

You want to learn something? You have so many choices! Start with Google. Go to the library. And do what Dad does – read and read and read. You’ll soon find that you know more than you could ever imagine.

And don’t tell me you don’t have time to read – we all have time, every day when we are waiting. And now, we have audio books, so we can read when we’re stuck in traffic too! Open a book every time you are waiting, and you’ll find that you have more time than you thought.

My Dad has always loved to take pictures. Our family has thousands and thousands of photos. Every time him and Mom go traveling, he comes back with hundreds more.

As the digital era dawned, Dad became curious about the potential to be able to use a computer to manipulate his photos. My brother helped him find a good computer and got him set up with some photo editing software. He many spent hours learning how to use the software. He made plenty of mistakes. When he got really stuck, he’d call me or my brother for help (which we were always happy to do).

Eventually, he got really good at it. Now, he’s got albums full of great photos, embellished with scrapbook-style graphics, that tell stories of his and Mom’s travels and adventures. He didn’t have to spend thousands of dollars on the tools or the training – he has just never lost his child-like curiosity for how things work, and he put in the hours to figure it out.

I think one of the things we lose first as we get older is our curiosity. We think old dogs can’t learn new tricks, and our stubbornness prevents us from taking on new challenges. We use excuses like, we’re too busy, or we aren’t techy enough, or we’re afraid of failing, so we decide to hide our curiosity away and just stick with the status quo.

The truth is, to become an expert at anything, you have to be curious first. You have to redevelop your sense of wonder about things. You have to realize that it’s okay to not know something, but that being curious about it is the first step to mastery. Because eventually, your curiosity will get the best of you – and you’ll HAVE to know more.

As long as I can remember, my Dad has always built things. I remember when I was a kid, he built desks for me and my brother, so we could do our school work. He builds stuff for the garden, like bird feeders and pergolas. He’s done most of the renovations on his and Mom’s house himself. He’s built doors for our shed and a cabinet for our bathroom. How did he learn to build things? He might tell you he took a workshop somewhere along the way, I don’t remember. But most of what he knows about carpentry he learned by what he’d call “OJT – On the Job Training”. He just did it. He made lots of mistakes – I’m sure he could tell you some stories. But perseverance and many many hours paid off, and now, he can build just about anything.

A few times a week, someone says to me that they don’t know enough about social media and the Internet. They seem to have no idea how to get started. They ask me how I became such an “expert” at this stuff, and are surprised when I tell them that I am completely self-taught. I learned by listening to smart people and watching what they were doing. But the most important thing I did was, I just dove in and started doing it. I screwed up a LOT. I spent a LOT of time. But eventually, I learned it, and I got better at it.

My Dad taught me that you can learn to do anything you want – but you need to get in there and just start DOING it.

Let’s face it – we all want to know more. We all want to be able to achieve things. Some of us may even want to become experts – not so everyone else can see us that way, but because we want the personal satisfaction of being curious, learning about something, and then putting it into practice.

So take it from my Dad…be curious, read, read, read, then do, do do. You’ll soon find that with enough time and commitment, you can become an expert in anything you want.

What will you learn next?

TV Is Not Dead

You DO Have Time for Social Media