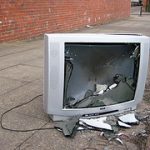 You hear it all the time. YouTube serves up hundreds of millions of videos per day. Video blogs are more popular than ever. And mainstream TV, with it’s so-called reality junk food shows like Jersey Shore, and endless reruns of Jerry Springer, is becoming redundant, is often repulsive, and ultimately will be rendered obsolete within a matter of a few years.

Yes, the Web has brought about a revolution in the way people consume video. Filmmakers are taking to the Internet to promote, release, and sell their feature films. Indeed, lots of people nowadays spend far more time getting their news and information from the Internet and far less time watching their 6pm local newscast.

Just 8 years ago, I can remember struggling to post videos online – the file sizes were immense, the quality was poor, and the pipe simply wasn’t big enough to handle the amount of data that video created. We’ve come far in a very short amount of time. Online video truly is a revolution, but it’s not a replacement for television. Not at all. And here’s why:

A few years ago, convergence was the big buzzword. All the major media folk were talking about how mainstream TV was going to merge with the Web and what a threat that would be to the industry. They predicted that within 2 or 3 years we wouldn’t be able to tell the difference between what we were watching online and what we were watching on our 60″ plasma. Nobody would have to watch ads anymore and television as we know it would be dead on the table.

Well that hasn’t exactly happened. While it’s true you can watch YouTube videos on your big screen now, and tools like Netflix and AppleTV are bridging the gap between traditional consumption of media and Web-delivered media, there’s still a big distinction with conventional, ad-driven television, and the cable companies and media moguls like it that way.

With that said, though, there’s a different kind of convergence happening with television – and it’s one that I like a lot. You see, one of the things the media empires didn’t bank on was social media. They didn’t guess that within 5 years of their convergence debates, the floodgates of anyone, anywhere, anytime publishing would open wide.

Television merged with social media is a whole different beast. It’s not TV online. It’s TV inline. We are still watching our favourite shows, commercials and all, and why? Because our friends are watching them too. Just look at what FourSquare was able to do with the SuperBowl. Or what the Vancouver Olympics achieved, with real-time commentary and conversation via Twitter. And look at the Oscars – same thing via multiple streams – blogs, Facebook and Twitter played a huge role in that event. The real time stream of conversation means I can watch television now with 100 million of my closest friends. It’s like a virtual bowl of popcorn, that we’re all able to dip our hands into while we gather around our respective boob tubes.

But it doesn’t even take a major network event to see the real benefits of the social channel when it comes to TV watching. Check out the cast and crew of the best sitcom on TV, The Big Bang Theory who are on Twitter. Every week, not only do we see photos of the cast rehearsing posted, but we get to sit down with the cast, crew and fans at 8pm ET every week and watch the show with them. We can follow the conversation in real time. We can laugh together, and post our favourite quotes. No longer do we have to wait to relive the episode at the water cooler tomorrow. The water cooler is online now.

And in the spirit of merging social with the show, Anthony Bourdain, beloved host of the hit travel/food show “No Reservations”, has hijacked his own Twitter account (it used to be run by his “people”) and the other night, live-tweeted the entire episode of his show in real time as it was airing. His witty and often crass sense of humour, and comical banter with other viewers, was not only wildly entertaining, it made me realize one very important point that will please every broadcaster in the world. 90% of people who PVR shows skip through the commercials. But if the host of the show is conversing with fans WHILE the show is running – people will be far more inclined to watch the show when it airs…and that includes the commercials. Can you say #winning?

This, my friends, is the future of television. It’s not going to be some hybrid mashup of laughing babies, William Shatner and Kenny from South Park. It’s going to be real people, in real time, really experiencing all that television still has to offer.

So don’t you worry, TV. You were my first love, and you will remain that way.

With Glowing Hearts: A Social Media Film You Need To See

How to Become an Expert in Anything