As some of you may know, hubby and I did our annual road trip to Indiana at the end of March to attend the Horrorhound Weekend convention. That convention, for us, is about so much more than movie screenings, shopping at vendor booths, and spotting the odd celebrity. It’s in a big way, an opportunity for us to see some of the fantastic friends we’ve made over the past few years.

One group in particular, is a team of podcasting friends who produce a show called Night of the Living Podcast. Dubbed as “a show dedicated to all things horror”, NOTLP is a weekly romp through horror, news, pop culture, and general hilarity. The 5 hosts (Freddy, Amy, Andy, Erica, Kelley and Chiseck) all hail from Cincinnati and bring equal parts of movie knowledge, horror culture and random silliness to the show. It’s hysterical and entertaining and totally Not Safe For Work (which makes it even more lovable).

Greg and I have been fans for years, and we’re fortunate to have become good friends with this amazing group of people. People who let two complete strangers who they met on the Internet into their home 3 years ago. Complete strangers who wanted to make a documentary about them. That involved re-enactments of bludgeoning and other ghastly things. People who spend a good majority of time watching horror movies (so they should know better). But, Cincinnatians are known to be kind, welcoming and generous people. And they figured, “Heck, Greg and Sue are Canadian. There are no psychos in Canada, right?” Heh heh.

Which is why the review I’m about to post is completely and utterly biased. 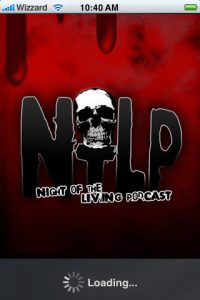 A few weeks ago, NOTLP released their iPhone app. I personally love, love LOVE when podcasters release iPhone apps. I think it’s one of the most effective ways to distribute (albeit to a “closed” audience of iPhone users, but NOTLP knows their audience!). I’m more inclined to listen to their show on a whim now, when I’m waiting in line, in the car, etc. because it’s literally there, at the push of a button. No loading iTunes, no waiting for syncs. Plus, they’ve included some great features, like the Episode Extras, that includes Wallpapers, a Web Site Link, Tell a Friend, and my personal favourite, Play in Background. There are also lots of contact options, including email, Twitter, Facebook but also the “Call The Show” button, which puts you through to their Viewer Feedback line. I can also star my favourite episodes (which is useful for NOTLP since they’ve done 178 shows).

Now, the App is $1.99 at the iTunes store. Some people grumble a bit when podcasters start charging for things. After all, I can download and listen for free at iTunes, right? The thing is, in this case, you’re not paying $1.99 for the content – you’re paying for the method of distribution.  iPhone apps are 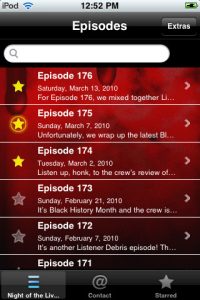 designed for convenience. I’m one click from the content now, instead of 10 clicks and a sync. To me, that convenience means a lot. It’s one of the main reasons I own an iPhone. Not to mention, the NOTLP app itself is gorgeous, and the user experience for me is a big part. But if paying for apps is not your thing, yes, you can still get the whole shebang for free at the iTunes store. It’s your call.

More media makers need to consider their distribution methods. With the trend towards new interfaces (like tablet computing), it’s going to be more important than ever to find new ways to distribute content. NOTLP are a small group of podcasters from the Midwest who are, in my opinion, crushing it in the media making space. We should all learn from the great example they are setting.

How To Get a Fresh Start This Spring