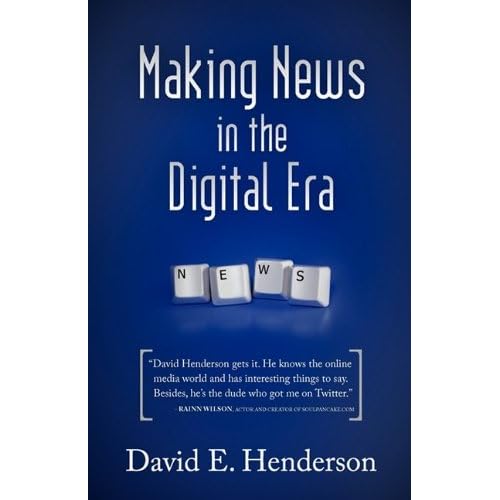 I disagreed with David Henderson the first time I met him.

Back in 2008 he wrote a post on his blog that in my opinion, discounted some fundamental truths about social media as I knew it at the time, and both myself and Danny Brown posted comments that expressed our side of the debate.

I confess having been a bit nervous about posting my comment. David’s an Emmy Award winning former CBS news correspondent. He’s appeared on nearly every major news outlet in the world. He’s also one of the top strategic communications consultants around – his client list is extensive and high profile. This guy knows a thing or two about media and strategic communications. Perhaps he was right in his 2008 estimation about social media having “…yet to make a meaningful connection with the real world of business or organizations.” Perhaps I was barking up the wrong tree on this. But I sucked it up and wrote my comment anyway.

David was kind enough to respond right away to our comments, and a lively discussion ensued between the three of us. David even asked myself and Danny to write follow-up post that highlighted some of the ways we had seen that businesses and organizations were using social media effectively. From that point forward, I’ve considered David not only to be someone who I have a great deal of respect and admiration for, but someone I consider a friend.

So, with that said, I’m not making any apologies for giving a glowing review of his new book, “Making News in the Digital Era”. Am I biased? You’re darn right I am. But regardless…this is a great book, and if you are communicating online, it’s a must-read.

Put simply, this is, in my opinion, the definitive book on how to be a more effective communicator in this age of convergence of traditional and new media.

There are many people out here who are quick to discount people coming out of traditional, “old” media as being out of touch, utilizing old fashioned, ineffective methods, and that this behaviour is directly contributing to the demise of traditional media as we know it. For that reason, people may consider glossing over a book written by someone with such a long history in traditional media.

Well, I can assure you, David Henderson is not your typical “old” media guy. He is firmly planted at the intersection between old and new media and has a level of understanding of traditional and modern approaches to communicating that I’ve not seen elsewhere.

In this book he not only describes the important role that traditional media is still playing for communicators and CEOs, but how success in the digital era requires understanding what’s worked in the past, what’s still working, what to throw away and what we still need to learn.

“Making News in the Digital Era” doesn’t muse about old and new media approaches – it provides real, concrete, strategic and tactical methods that you can actually use. David is handing out strategic communications advice here that is absolutely invaluable, whether you’re a PR pro, a CEO or anyone looking to tell better stories and attract the media’s attention. He has a wealth of experience and has generously embedded it in the pages of this book for us to take away and apply to our own projects. He makes it simple and clear.

As mass media and new media come ever closer together, it’s critical for anyone who makes media, online or off, understand how to be heard above the noise. Pick up a copy of this book, and you’ll be well on your way to better understanding not only how, but WHY you need to be a more effective communicator.

My Left Hand and Three Words

Want To Be Taken Seriously? It’s Up To You, Tweetheart.