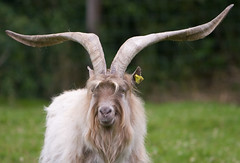 I’ve been reading a lot of blog posts and tweets lately about people being averse to “tooting their own horn”. And I’m not sure I really understand the aversion.

Ok, I know there are lots of spammers out there. I know there are certain types of people that seem to do nothing but shamelessly self-promote their wares. But I think that they are really in the minority.

The blogosphere, the Twitterverse, the Plurk Nation – they are all run by people. People who have something to say. People who want to have conversations, make connections, establish relationships. If we aren’t all out here “tooting”, then what are we doing?

When I update my blog, or my Twitter feed, or my Facebook page, am I not, in some way, promoting myself? Even if I am just saying what I’m up to right now, or I’m replying to someone, or commenting…that’s all promotion of myself, my ideas, my sense of humour…what have you.

I agree that there are good ways and bad ways to toot your horn. Here are a few things that I’ve learned about what I like to call “The Art of Shameless Self-Promotion”.

Admit it.
Louis Gray writes about disclosure and transparency on his blog. So does Chris Brogan. It’s pretty essential and important to consider. Sneaky tricks to promote your stuff are just that…sneaky. So, if you are going to shamelessly self promote, at least admit it! I’ve sent emails to colleagues and friends entitled “Shameless Self Promotion”. Even if they delete the email, at least maybe I’ve got their attention for a second and made them snicker. (Note that I said “friends and colleagues”. I don’t recommend sending these kinds of emails to people that you don’t have an existing, pretty solid relationship with. Make sure the people on your list have a sense of humour about this stuff.)

Be Subtle.
This may seem to be a contradiction to my last point, but it’s not, really. Self Promotion done well is a balance of putting it out there, but doing it in such a way that you are not putting people off. It’s kind of akin to giving someone a gentle tap on the shoulder to get their attention and grabbing them from behind in a giant bear hug. The gentle tapper says “I’m here, if you want see what I’m about”. The bear hugger says “Here I am! Here I am! No, right here! Pay attention to MEEEEE!” See the difference? So go ahead. Self promote, using all your channels, like Twitter, your blog, Facebook, FriendFeed, LinkedIN. Just make sure you aren’t too “in your face” about it.

Gauge Yourself.
Not sure if you are being too overbearing? Well for starters, if you are, people will let you know pretty quickly. Usually they will just start ignoring you, or blocking themselves from your line of fire. What it comes down to is common sense. Does it make sense to send out an unsolicited email to everyone on your contact list and all your Facebook friends and all your Twitter followers about your latest blog post? Of course not. Does it make sense to do a quick post to Twitter, and maybe a link on your Facebook profile? Sure. Why? Because the latter method is non-intrusive. It gives people a choice if they want to buy in to your self-promoting ways. And if they don’t? So be it. At least you’ve put the word out.

The #1 Way to Shamelessly (and subtly) Self Promote
I am surprised all the time by the new people that come across my blog. And you know the #1 way people find me? Through comments I make on other people’s blogs. Yup. Not through my Tweets, not through my Facebook, LinkedIN or anything else. I comment on people’s blogs. Probably 5 to 10 a day. Now, don’t get me wrong. I’m not saying go out and put inane comments on a bunch of blogs to get your name out there. What I AM saying is go out there and make a contribution to the community. Get involved in the conversation. Express yourself. If you do this with integrity, people will visit you because they are interested in what you have to offer. This is the give and take game of social media. And when you play it right, the rewards will be real and fulfilling.

So go ahead – toot your own horn!

Why It's Important to Keep the Well Full