I am a virtual attendee of Podcamp Toronto 2008. Sadly I was not able to be there in person, so this is the next best thing. 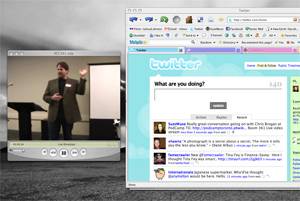 I just sat in on a session lead by social media guru Chris Brogan. One thing Chris is great at is putting things into a context that anyone can understand. This means he has some great quotes. Here are my Brogan-isms from the past hour:

“Mainstream media is not afraid of social media, they just don’t know what to do with it.”

“No one has to be granted the authority [to make a blog, a podcast, or contribute to a conversation].”

“The thing about social networking is, the more we help people feel good about themselves the more they do good things.”

I’ve been troubled by something for the past little while. I now consider myself to be an “intermediate” level user of social media. I’m at the point where I’m pretty well versed on many of the popular tools and sites, I have a pretty good network of social media experts around me to answer my questions and open my eyes to new things, and I now have the confidence to start talking about what I know with other people.

I get RSS. I get Twitter. I get podcasting, Oovoo, and WordPress. But I can’t figure out for the life of me how to explain it all to my Mom. Ok, my Mom is a bad example because she has a Facebook page, reads blogs and uses Instant Messaging. But she is the exception of her generation, not the rule.

This morning’s Podcamp session has got me thinking…social media is now becoming more mainstream, because mainstream media is starting to catch on. Fast Company is doing it. USA Today is doing it. Now, people who get their news the old fashioned way are being given an opportunity to take advantage to the biggest thing to happen on the Internet since …well…ever!

Social networking is one of those things that people don’t get until they try it.

So maybe, the question is..how do we get them into the social media space in the first place?

To Procrastinate or to Incubate?

Making a Case for Social Media